A couple’s scheme to get rich by killing their father backfires, leaving them in charge of a cripple. In heaven, a baby, dead through neglect, tells his playmates: “Life down there is just one long sleep.” A young soldier, saved by a stranger, can never again find her to thank her. A man carries a massive clock.

Using a variety of techniques and styles, in this collection of twelve short stories contemporary Vietnamese writers—edited by poet, short story writer, and novelist Linh Dinh—show us Vietnam through their own eyes. Night, Again breaks with the traditional views of the Vietnamese that have focused on the Vietnam War and turns our attention to postwar life in Vietnam. These writers present impressions–at once strange and familiar–of postwar realities.
Read more

In the six years since Vietnam’s cultural “renovation” or Doi Moi, readers around the world have finally gotten access to many of the country’s most gifted and prominent authors. Night, Again collects a dozen of these often censored and sometimes imprisoned writers, such as the extraordinary Bao Ninh (The Sorrows of War), whose “A Marker on the Side of the Boat” alone makes this collection worth reading. Other highlights include work by Nguyen Huy Thiep, Duong Thu Huong, and Nguyen Minh Chau, a former colonel in the North Vietnamese Army who died from his exposure to chemical defoliants.

Night, Again is not a collection of pretty stories with happy endings, but one that reflects the hardships and unfairness of life in general, and of devastated Vietnam in particular. One is always aware of how different this culture is, but lyrical language and carefully rendered characters make these stories universal. As Linh Dinh states in his introduction: “the soul of any literature lies in its relationship to the vernacular.” Night, Again is an interesting cross section of life, love, loss and redemption. Although not as powerful as last year’s The Other Side of Heaven: Postwar Fiction by Vietnamese & American Writers (Curbstone Press), this collection can still unite readers from the U.S. and Vietnam after decades of discord.
Copyright 1996 Reed Business Information, Inc.

Where other translations of Vietnamese literature–Bao Ninh’s Sorrow of War, Duong Thu Huong’s Paradise of the Blind or Novel without a Name, or the American anthology The Other Side of Heavenhave circulated, this short story collection is likely to find readers. (Eight of the collection’s 12 stories are published for the first time in English here.) The stories’ authors–Nguyen Thi Am, Bao Ninh, Duong Thu Huong, Nguyen Huy Thiep, Le Minh Khue, Do Phuoc Tien, The Giang, Pham Thi Hoaih, Mai Kim Ngoc, Tran Vu, Do Kh, and Nguyen Minh Chau–include major figures in the history of Vietnamese literature as well as newer voices from the generation born during the ’60s. Some still live in their homeland; others, including editor Dinh (who also supplies a helpful introduction), live and work in the U.S. or Europe. War is inevitably one motif of these stories, but Doi Moi has allowed at least some writers to consider Bloody Marys and belly dancing as well as bombs and burning flesh in their fiction. Definitely worth considering. Mary Carroll

A recipient of the Pew Foundation grant, the David T. Wong Fellowship, a Lannan Residency and the Asian American Literary Award, LINH DINH is the author of two collections of stories, Fake House (Seven Stories Press, 2000) and Blood and Soap (Seven Stories Press, 2004), five books of poems, All Around What Empties Out (2003), American Tatts (2005), Borderless Bodies (2006), Jam Alerts (2007) and Some Kind of Cheese Orgy (2009), and the novel Love Like Hate (Seven Stories Press 2010). His work has been anthologized in Best American Poetry 2000, 2004, and 2007, and in Great American Prose Poems from Poe to the Present, among other places. Linh Dinh is also the editor of the anthologies Night, Again: Contemporary Fiction from Vietnam (1996) and Three Vietnamese Poets (2001), and translator of Night, Fish and Charlie Parker, the poetry of Phan Nhien Hao (2006). Blood and Soap was chosen by the Village Voice as one of the Best Books of 2004. He has also published widely in Vietnamese.
Read more

Be the first to review “Night, Again: Contemporary Fiction from Vietnam” Cancel reply 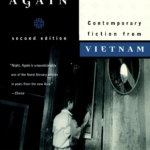