Fake House, the first collection of short stories by poet Linh Dinh, explores the weird, atrocious, fond, and ongoing intimacies between Vietnam and the United States.

Linked by a complicated past, the characters are driven by an intense and angry energy. The politics of race and sex anchor Dinh’s work as his men and women negotiate their way in a post-Vietnam War world. Dinh has said of his own work, “I incorporate a filth or uncleanness to make the picture more healthy–not to defile anything.”
While Fake House delves into the lives of marginal souls in two cultures, the characters’ dignity lies, ultimately, in how they face the conflict in themselves and the world.
Read more

Award-winning poet Dinh’s (Drunkard Boxing) hit-or-miss first collection of short stories examines postwar Vietnamese in the U.S. and in Vietnam. The 22 stories, often more memorable for their imagery than their plots, are narrated in the no-holds-barred, graphic language distinguishing the author’s poetry. The first half of this collection focuses on Vietnamese immigrants living in the U.S. In the title piece, Josh is a free-spirited ne’er-do-well visiting his successful younger brother (whom he nicknames “Boffo,” short for “Boffo Mofo”) in order to squeeze a few bucks out of him. Boffo tries to disparage Josh’s lifestyle, but can’t help secretly admiring his brother’s world, compared to his own shallow, American dream-like “Fake House.” Becky, “The Ugliest Girl,” is so plain that “Not counting the freaks, the harelips, the Down’s Syndromes, the ones with lye splashed on their face, born without a nose, an extra mouth, five ears, and so on, I am the ugliest girl.”

The author does not shy away from jarring narrative perspectives. Part Two takes a look at life in Vietnam after the war. Characters like Lai’s father, a legless NVA veteran who cares for his grandson while his daughter works as a hostess (prostitute) in a disco, explore the war’s lasting effects with a bittersweet humor. His grandson is half African-American, and the vet, who spared an African-American soldier in the war, says to himself, “A karmic joke: Since you liked the first one so much, here! Have another one.” Not every literary tone poem presented here is successful. “Two Who Forgot” is more of a rant than a story. But the train wreck of war is hard to look away from, and Dinh, the poet, holds a mirror to the lives of all who suffered and dares the reader to look away. Yet his inveterate use of profane language and raw sexual detail may limit the book’s readership. (Oct.)
Copyright 2000 Reed Business Information, Inc.

Dinh, a poet and short-story writer, left his native Vietnam in 1975 at age 12 and lived in the U.S. until 1998, when he returned to Saigon. This intimacy with two disparate cultures linked by war imbues his terse and edgy stories with an unsettling blend of anger and resignation. Writing from the point of view of both men and women, Americans and Vietnamese, Dinh portrays a spectrum of hapless characters, from a white man considering ordering an Asian mail-order bride, to a Vietnamese man wondering why more young women in his village don’t accept money to marry foreigners, to a white woman who believes she’s the ugliest female in the world, to a Vietnamese soldier who, as the only literate man in his battalion, reads everyone else’s mail while receiving none himself. Dinh’s painful stories feature tricky dialogue rife with pointedly racist misinformation, linguistic confusion, and dunning vulgarities, and evoke a skeptical yet tender vision of humanity, similar in spirit, if not in literary artistry, to that of Sherman Alexie and Aleksandar Hemon. Donna Seaman
Copyright © American Library Association. All rights reserved

“Linh Dinh’s is a unique voice in contemporary American literature. He writes with the raging wit and the soul of a poet. Infused with beautiful black humor, Fake House marks an auspicious debut for this exciting young writer.” –Jessica Hagedorn, author of Dogeaters and The Gangster of Love

“Twenty-one nervy stories portraying Asian and American culture, separately and in conflict, by a poet . . . known for his editorship of an important anthology of Vietnamese Fiction (Night, Again, 1996). . . . Vividly imagined characters . . . an interesting collection.” –Kirkus Reviews

A recipient of a Pew Foundation grant, a David T. Wong Fellowship, a Lannan Residency and, most recently, the Asian American Literary Award, LINH DINH was born in Saigon in 1963 and emigrated to the United States in 1975. An acclaimed and provocative writer of short stories and contemporary fables, he is also the author of several books of poems and a novel, Love Like Hate. Linh has edited the anthologies Night, Again: Contemporary Fiction from Vietnam and Three Vietnamese Poets. His collection of stories, Blood and Soap was chosen by the Village Voice as one of the Best Books of 2004. Linh’s nonfiction essays have been published regularly at Unz Review, LewRockwell, Intrepid Report and CounterCurrents, and his blog, Postcards from the End of America (linhdinhphotos.blogspot.com), is followed by thousands of readers. He has also published widely in Vietnamese.
Read more

Be the first to review “Fake House: Stories” Cancel reply 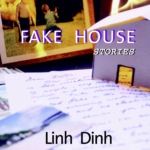