Over the years, writers such as Tim O’Brien and Michael Herr have written about the Vietnam War and its aftermath from an American soldier’s perspective; Robert Olen Butler, on the other hand, performed a feat of cultural ventriloquism in A Good Scent from a Strange Mountain, describing the country, the conflict, and its aftermath from a (mostly civilian) Vietnamese point of view.

There’s something to be said for the genuine article, however, and in The Dragon Hunt, Tran Vu writes of diaspora, exile, and loss with the wisdom only experience can give. Born in Saigon in 1962, Vu fled his country 16 years later in a small, overcrowded boat that eventually wrecked on a coral reef. For 10 days he survived in the water, and this horrific experience is at the center of the first of five stories, “The Coral Reef.”Arms flailed like tentacles through the portholes, trying to get a grip on the hull. People were jumping overboard. Some were struggling through the wreckage to get to the sealed cabins, where we could hear the screams of the trapped women and children. By some instinct, I jumped into the sea. From the clean, spare terror of shipwreck, Vu moves to a more claustrophobic (and, unfortunately, more purple) rendering of domestic horror in “Gunboat on the Yangtze,” a dark and violent tale of madness and incest. These two stories stake out opposite extremes on the spectrum of Vu’s writing style. The other three fall somewhere in between, but even the least among them is infused with fierce intelligence and remarkable insight into the complex connections between memory, loss, and desire. In The Dragon Hunt, Vietnam, at last, speaks for itself. –Alix Wilber
Read more

Be the first to review “Dragon Hunt” Cancel reply 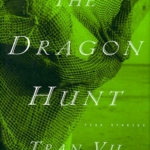