Peace and Prisoners of War: A South Vietnamese Memoir of the Vietnam War

American discussions of the Vietnam War tend to gloss over the period from 1972 to the final North Vietnamese offensive in 1975. But on the battlefields, these were brutal times for America’s South Vietnamese allies combined with a period of intense diplomatic negotiations conducted under the increasing reality that America had abandoned them.

In Peace and Prisoners of War, written in “real-time” as events occurred, Phan Nhat Nam provides a unique window into the harsh combat that followed America’s withdrawal and the hopelessness of South Vietnam’s attempt to stave off an eventual communist victory. Few others could have written this book. Phan Nhat Nam saw the war for years as a combat soldier in one of South Vietnam’s most respected airborne divisions, then as the country’s most respected war reporter, and for fourteen years after the war as a prisoner in Hanoi’s infamous “re-education” camps, including eight years in solitary confinement. In the war’s aftermath anonymity became his fate both inside Vietnam and here in America. But now one of his important works is available, enhanced by an introduction by Senator James Webb, one of the most decorated Marines in the Vietnam War. Webb describes this revealing work as “an unvarnished observation frozen in time, devoid of spin or false retrospective wisdom.” Phan’s reporting makes clear the sense of doom that foretold the tragic events to come, on the battlefields and in the frustration of negotiating with an implacable enemy while abandoned by its foremost ally.

Readers will find this book both enlightening and disturbing, its observations until now overlooked in most histories of the Vietnam War.

Be the first to review “Peace and Prisoners of War: A South Vietnamese Memoir of the Vietnam War” Cancel reply 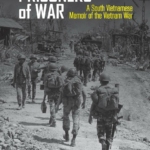 Peace and Prisoners of War: A South Vietnamese Memoir of the Vietnam War