This book utilizes select elements of operational art from ADRP 3-0 to examine how General Lewis Walt employed operational art as the III Marine Amphibious Force (III MAF) commander in Vietnam from June 1965-June 1967. This book addresses a significant shortfall in literature focused on Corps-level operational commanders during the Vietnam War. 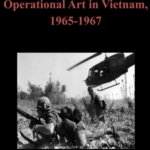