Based on a comparison of six Asian cases, including both capitalist and socialist states with varying structural cohesion, Tuong Vu proves that it is state formation politics rather than colonial legacies that have had decisive and lasting impacts on the structures of emerging states. His cross-national comparison of South Korea, Vietnam, Republican and Maoist China, and Sukarno’s and Suharto’s Indonesia, which is augmented by in-depth analyses of state formation processes in Vietnam and Indonesia, is an important contribution to understanding the dynamics of state formation and economic development in Asia.
Read more

Be the first to review “Paths to Development in Asia: South Korea, Vietnam, China, and Indonesia” Cancel reply 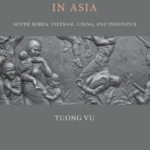