The Republic of Vietnam, 1955-1975: Vietnamese Perspectives on Nation Building

Through the voices of senior officials, teachers, soldiers, journalists, and artists, The Republic of Vietnam, 1955–1975, presents us with an interpretation of “South Vietnam” as a passionately imagined nation in the minds of ordinary Vietnamese, rather than merely as an expeditious political construct of the United States government.

The moving and honest memoirs collected, translated, and edited here by Tuong Vu and Sean Fear describe the experiences of war, politics, and everyday life for people from many walks of life during the fraught years of Vietnam’s Second Republic, leading up to and encompassing what Americans generally call the “Vietnam War.” The voices gift the reader a sense of the authors’ experiences in the Republic and their ideas about the nation during that time. The light and careful editing hand of Vu and Fear reveals that far from a Cold War proxy struggle, the conflict in Vietnam featured a true ideological divide between the communist North and the non-communist South.
Read more

Be the first to review “The Republic of Vietnam, 1955-1975: Vietnamese Perspectives on Nation Building” Cancel reply 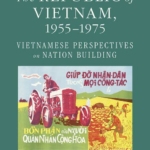 The Republic of Vietnam, 1955-1975: Vietnamese Perspectives on Nation Building